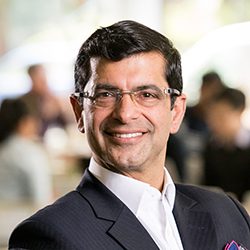 Shitij Kapur is the Dean of the Faculty of Medicine, Dentistry and Health Sciences and Assistant Vice-Chancellor (Health), University of Melbourne.

His background is as a clinician-scientist with expertise in psychiatry, neuroscience, and brain imaging. He trained as a psychiatrist at the University of Pittsburgh and undertook a PhD and Fellowship at the University of Toronto. Before moving to Australia, he was Executive Dean of the Institute of Psychiatry, Psychology and Neuroscience, Europe’s largest and leading centre for mental health research, and prior to that, Vice-President (Research) for the Centre for Additction and Mental Health Toronto, Canada’s premier centre for research into mental health and addictions.

He has practised psychiatry in the US, Canada, and the UK, is a Diplomate of the American Board of Psychiatry and Neurology (USA) and has served as a Non-Executive Director of the South London and Maudsley NHS Trust in the UK, as Secretary of the International College of Neuropsychopharmacology, and the Treasurer of the Schizophrenia International Research Society. He currently serves as a director on the boards of the Royal Melbourne Hospital, Walter and Eliza Hall Institute of Medical Research, St Vincent’s Research Institute, and Aikenhead Centre for Medical Discoveries.

Professor Kapur has published over 300 peer-reviewed papers, his work has received over 30,000 citations, he has an H-index of over 85 and has received various national and international awards including the E Bennett Award of the Society for Biological Psychiatry an the Paul Janssen Award of the International College of Neuropsychopharmacology. He is a Distinguished Fellow of the American Psychiatric Association; a Fellow of the Academy of Medical Sciences, UK, and a Fellow of King’s College London.

His current interests include the future of health practice, the design of health systems, and how connected data might be used to improve the future of individuals and communities both at a local and international level.