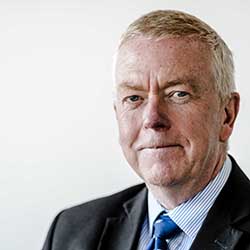 John Savill graduated in Physiological Sciences from Oxford in 1978 and in Medicine from Sheffield in 1981. He received a PhD (London) in 1989. After junior hospital appointments in Sheffield, Nottingham, and London, he spent seven years in the Department of Medicine at the Royal Postgraduate Medical School, Hammersmith Hospital, with spells as an MRC Clinical Training Fellow and Wellcome Trust Senior Clinical Research Fellow.

In 1993, he moved to the Chair of Medicine at Nottingham, subsequently moving in 1998 to Edinburgh as Professor of Medicine, where he set up and became the first Director of the University of Edinburgh/Medical Research Council Centre for Inflammation Research.

Between 2002 and 2017 he served as the first Vice-Principal and Head of the College of Medicine and Veterinary Medicine; he was appointed to the Regius Chair of Medical Science in 2017.

From 1st June 2008 to 30th September 2010, he was Chief Scientist for the Scottish Government Health Directorates (part-time). On 1st October 2010 he was appointed as Chief Executive and Deputy Chair of the Medical Research Council, combining this with Head of College duties in Edinburgh; he demitted from the MRC at the end of March 2018.

His work has been recognised by fellowships of the Royal Colleges of Physicians of London and Edinburgh, the Academy of Medical Sciences, the American Society of Nephrology, The Royal Society of Edinburgh, The Royal Society and an honorary fellowship of the Royal College of Surgeons of Edinburgh. He was a member of the Medical Research Council from 2002 to 2008 and chaired two Research Boards during this period. He was knighted in the 2008 New Year’s Honours List for services to clinical science.